“Members of Council are very aware of recent online discussions regarding the ‘Cows and Ploughs Specific Claim’. We feel that these discussions have presented grossly inaccurate information and resulted in significant confusion amongst community members.

In 2008, the ‘Treaty 6 Agricultural Assistance’ claim was submitted to the Specific Claims Tribunal. In 2011, for reasons beyond the Nation’s control, that claim was ‘Not Accepted for Negotiations’.

On April 3, 2018, on direction from Council, Maurice Law resubmitted the claim on behalf of the Nation. 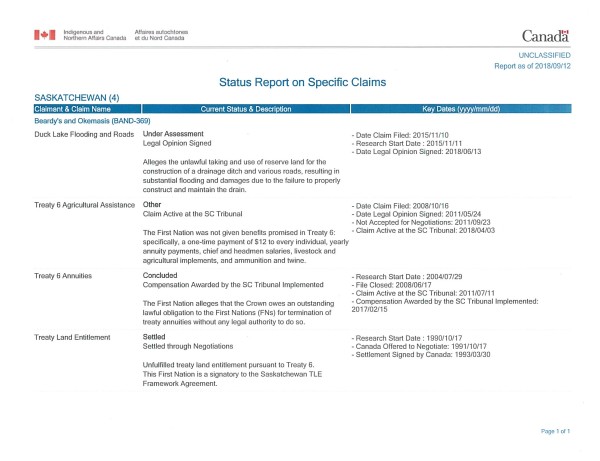 As you can see in the document provided, we have not yet entered into negotiations regarding the settlement of this claim; and to be clear, our Specific Claim has not yet even been accepted by the Specific Claims Tribunal.

Yes, other Nations – specifically in Treaty 8 territory – have settled similar claims, however, it is critically important to note that those claims are specific to those Nations and are in no way related to our claim.

We invite you to attend the Nation’s Members’ Assembly on September 26th where you can pose your questions to the Nation’s legal counsel, Maurice Law. It is also important to note that an update regarding this matter was provided by Maurice Law on Treaty Day.

Article 4.3(e) of the Constitution of the Beardy’s & Okemasis’ Cree Nation states that ‘members have the right to be included, engaged, and informed.’ If you have questions regarding this or any other matter, just ask.”

#RoundDance time next week! #2020 #NewYear #BOCN
Statement from the Chief: CO-MANAGEMENT/INTERVENTION STATUS REMOVED. Visit bocn9697.com for details.
$50 Christmas gift cards for all 3,550+ #BOCN members. Details at bocn9697.com
"We are a Nation of many nations" states the BOCN Constitution recognizing the diversity of our community, and the bonds that link us together. . Today, we honour Louis Riel, the founding father of the #Métis Nation. . #LouisRielDay
We will officially unveil our permanent #Veterans Memorial on Monday, November 11th, #RemembranceDay.
#GoVote!!! Polls open all across #SK at 7:30am. #BOCN members can vote at the Justice Building with their Voter Card and photo ID, or a current bill and their ID, or bring a family member or friend to vouch for you. . #Elxn43 #IndigenousVoicesMatter #IndigenousVotesMatter